Made By Wade: The Year In Review

It’s been a productive year for us here at Made By Wade. Dom has been busy taking a ton of photos in areas as different as Scotland and the USA. There have been a couple of film-making highlights, which the man himself will now expand upon for you. Take it away, Dom!

Stewy, Joe Orton and Leicester
I was commissioned by Dr Emma Parker of Leicester University’s School Of Arts to produce a short documentary about street artist Stewy’s image of Joe Orton that he sprayed in the David Wilson library at the university.
The artwork and film was made to help mark the 50th anniversary of Orton’s death. Joe Orton was from Leicester and very much left his mark in the world of play writing. He is well known for having written Entertaining Mr Sloane. This was performed as a play in London’s West End and made into a film starring Beryl Reid, directed by Douglas Hickox.
The shoot consisted of an interview I shot with Stewy in Bristol before the day and a another at Leicester University with Dr Emma Parker and a number of other people who featured in the film. Stewy was filmed spraying the Joe Orton stencil in the library. Four pieces to camera were shot with academics from Leicester University along with Nikolai Foster from the Curve Theatre in Leicester.
After the shoot a ten minute edit was produced from all the footage that was shot. This edit was constructed in close collaboration with Dr Emma Parker. The film features a new song by the group Alberteen called ‘Hey Joe’. This was written specially for the 50th anniversary commemorations.

You can watch the film on the University Of Leicester YouTube channel–or below!

Steel is Real but Carbon is Quicker
This is my second attempt at a longer form documentary film. I have shot 18 interviews so far. I have one more planned for January 2018. Maybe I should shoot 20 interviews just to get to a round number!
I made a start on editing all the interviews at the start of the year. Just before this I made a short film about my taking part in the Rapha Festive 500 ride challenge. This film has barely been seen for reasons I cannot divulge here!
My approach to all the interviews was to cut all the responses from each interview into a time line so that I can refer back easily to what each person said.
I had a deadline for the Portobello Film Festival at the start of September. This gave me enough time to get a short version of the documentary made. So into the interviews I headed.
The 8 and a half minute version that came out of these months of editing is basically made up from a selection of first responses from some of the interviews.
This short version of Steel is Real but Carbon is Quicker was screened at the Portobello Film Festival at the start of September. I’m very happy to say it went onto win best documentary at the festival! This is the first award I have won for my film making. Sadly, I couldn’t be there for the award ceremony, but the Trellick was accepted on my behalf by interviewee and friend of the film, Dini Kennedy. 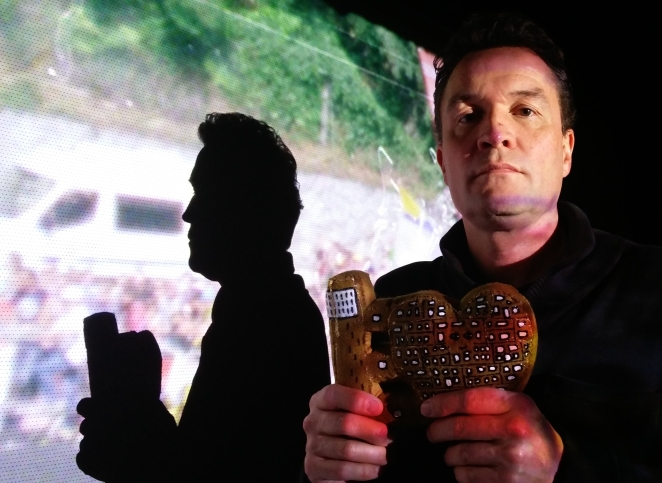 Dom and his Trellick.

I now feel I have a reasonable direction to take with the rest of the editing. I think the film may end up having the feel of being each interviewee’s story with cycling. The interviews will hopefully cross over in a pleasing way as each person shares their experience with the sport of cycling.

I am aiming to have the longer (hour or possibly feature length) cut complete by early 2018. Where might the first screening of this version be?

Where indeed? We’re looking forward to the new challenges and opportunities that 2018 has in store. From us at Made By Wade, have a happy and successful New Year!